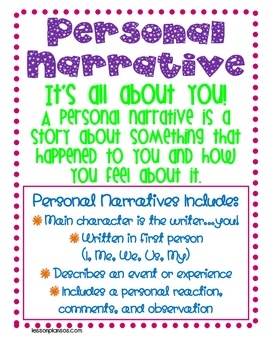 How to Write a Personal Narrative

High school was like my middle school experience; just older and matured people who knew how to make bullying unnoticeable. Final straw for me was my own personal hands on experience. I was a junior in high school, a sixteen year old girl. Into the hair and makeup just to go to school. It was the end of the week and I had planned out what I was going to wear to school on Friday.

Funny now to look back at it, because who was I trying to impress. Well, Thursday night I had all my stuff set up and planed on getting up early to curl my hair. Told my sister I was getting up early and I would be quite so she could sleep in. Bone-shaking anxiety filled the morning of my first day of high school. Coming from Christ the King, I had never had more than twelve kids in a class with me, and now I would have a minimum of twenty? That alone made me nervous, but I also had to walk through the dreaded Senior hallway to get to my Science class, and I was terrified at the thought of making my way through that maze of giants.

However, everything went smoothly in those areas, and all that awaited me was the class that I feared the. Being the oldest of six children, I considered myself to be the guinea pig and the one that had to experience the journey first without any help. However, the transition was smooth and I got used to the way the school worked within a month or two and was able to survive my three short years until high school. To be honest. My Junior High School experience was good. I was excited to start a new school, I had butterflies in my stomach because I did not know what was going to happen to me.

I have heard a lot of stuff from that school that it was bad that I was not going to like it. I just graduated from the 5th grade going to the 6th grade and I was happy because I was going to start a new school and meet new friends also meet new teachers. Everyone told me Junior High School going to be Harder that they are going to. Learning something new every day seems really boring to high school students. But, looking back to when we were younger, it was very exciting for some of us. One of the roughest things I had to learn was ride a bike.

I was excited to learn how to ride a bike without training wheels, so I could be like my brother and dad. I learned that doing what your parents says is the safest way to doing anything. New things to me always scared me away, and riding a bike was no exception at all. After I changed into my brothers old racing clothes, I went outside to get on my bike. I was struggling to sit on the seat of the bike and keep it balanced. After, I finally got adjusted comfortably my dad came over and handed me a helmet.

He helped me get to the end of our bumpy driveway. When we got there, I was extremely scared. Sometimes, you just miss having close friends of both genders! Jeremy is such a winsome protagonist, and I totally fell for his group of girl friends at St. The Last Boy at St. That day my editor emailed me the cover? And will soon be available for pre-order elsewhere! Also, if you are wondering, who illustrated that beaut? Feeling so, so lucky. Our team was in last place for the second year in a row, Koji was lost for the season, Dustin injured, our starting pitchers were abysmal, the new highly paid guys stunk, and our manager, John Farrell, was diagnosed with cancer.

That reason is Remy and Orsillo. A team. MLB gameday and the radio were no substitutes. I had to have my Don and Jerry. There was something beautiful and simple about their chemistry. It should go without saying that their love of the game of baeball was deeply apparent. There were other things they loved, of course, and if you watched nearly every game each season as I did, you knew and celebrated their quirks. The pizza incident. These were two men that loved, absolutely loved, coming to work every day.

And he had it. That baseball would be here soon. For us. For him. The RedSox tipped their caps to Don Orsillo after his final broadcast. What a moment. ThankYouDon pic. Eleven-year-old Thyme Owens has just left her beloved home and grandmother, and best friend behind in San Diego, and moved to the Big Apple. Her younger brother Val short for Valerian has been accepted to be part of a drug trial to treat his neuroblastoma, a nerve cancer.

The two things she most wants pull her in opposite directions. Val getting better, and a return home; can she have them both? In a way, she thinks she can. To go back home. Meanwhile, a life in New York city beckons. New potential friends. A cute boy in class. A crotchety downstairs neighbor with a cockatoo. Ravioli — ahem, Mrs. The school play, The Wizard of Oz , and being in the sound crew with said cute boy. I boarded my cross-country flight this morning with one goal. I was going to read Counting Thyme on this flight and it was going to help me pass the time!

Oh, did it. My heart ached for Thyme as she so often put herself second in caring for her little brother. This family felt so real for me, which of course is what led to the sniffling. Thyme is self-deprecating and funny, sometimes brave, sometime shy and awkward, but full of love and hope and fear. The fear of losing Val, of Val ending up in the hospital, of his body resisting the trial — all of that is always there, always simmering beneath the surface. Though Thyme keeps her real reason for being in NYC a secret from her peers at school, she can never keep the truth far from her own mind. Counting Thyme G. The great thing about writing middle grade fiction is that you can draw from a deep well of memory.

Still, there are some parts of a story that you just need that actual life experience. Yes, I am over the age of thirty and I have never in my life been on a Ferris Wheel. I know! As a kid, I was pretty prone to dizziness. I felt dizzy even after the merry-go-round. And, okay, I was a little anxious and high-strung as a kid. But I still rode the roller coasters! The old wooden ones AND the newer ones that went upside down.

Peer pressure. Boring, I know. Back to the Woodstock Fair! Labor Day weekend! In my next middle grade novel with Knopf, due out in summer , a traveling fair comes to the town where all the action is set, and in a pretty meaningful scene, the main character, Maddie, rides the Ferris Wheel with her crush, Avery. I know how it works. But having just experienced my first book go through copyedits, I started getting wary. What if I got important Ferris Wheel details wrong?! Better ride that thing to make sure.